There's A Mouse In My House (or at least there was)


NOTE:  This is not an original post.  I originally posted it a couple of years ago to another blog I was writing at that time.  I have made a few minor alterations, but my apologies to those of you who have already read it.

Ok, that's a lie.  I know there was, almost beyond a shadow of a doubt. I just don't want to believe it.  Unfortunately, I don't have much choice.  Consider the evidence ...

Picture it:  my house ... about 7:00 am EST, one week ago. I stumbled, bleary-eyed, out of bed, down the hall and into my dining room, en route to the kitchen to serve breakfast to the fur people, who were alternately capering ahead of and/or behind me, or twining enthusiastically around my ankles in anticipation of their morning repast.  Whereupon, to my profound dismay, my bare foot encountered something squishy and unidentifiably disgusting, but thankfully no longer warm, where it had expected to find only the same smooth, aged heart of pine floor I traverse each and every day of my life.

I let loose with a distinctly high-school-girlish shriek, jumped sideways, and landed on one of The Diva's snow white paws, which she, incidentally, did not in the least appreciate, but which was helpful to me as the bone-piercing yowl said indignity elicited from Her Royal Caliconess aided in bringing me more fully to consciousness, and flicked on the light in the dining room.  Peering down through eyes that were still sleepy but now wide open in shock and the anticipation of horror, I spied what at first looked to be a very long, rather thick, lizard tail and the much-masticated remains of a lizard-ly lower torso.

Initially, I relaxed, albeit marginally.  Stepping in lizard guts before I'd even had my first cup of coffee is not exactly my idea of living the dream, but I could deal.  Being the utterly fearless, bad-a$$ that I am, I reached down, grasped the end of the alleged lizard tail, and peered closely at it.  Still battling the effects of the previous day's sixteen hour workday, I at first did not trust what my tired eyes were telling me, and so did an about-face back into the hall to look more closely at what I was grasping under the strong lights in my bathroom.  This is where it all fell apart.

Because in the harsh fluorescent lights of said bathroom, it quickly became all too clear that what I was holding, IN MY BARE HAND I MIGHT ADD, was not a disembodied lizard tail, but rather the tail of a mouse, and that what was attached to that tail were the gruesome remains of said mouse's lower torso and its left hind leg and foot.

Quicker than you can utter a string of words all approximately four letters long, I had, acting purely on instinct, flushed what remained of the sad little corpse down the toilet, then proceeded to gag into the sink and spend the next twenty minutes washing my hands under water so hot that it is scarcely an exaggeration to say that for the rest of that day I went around sporting first degree burns on hands that, previously sorely in need of a manicure, were now sore in a more literal sense of the word.  All I can say is, it is for precisely situations like these that the acronym FML was coined.

Also, in case you were wondering, my day did not improve one iota for the remainder of that 24 hour period, though it did not, fortunately, get any worse.  Although, let's face it.  Stepping in the remains of a dearly departed rodent, and then grasping said remains in one's bare hand all while scarcely awake and ambulatory is pretty hard to top!

Now for the back story.  A few days prior, I had rather absentmindedly noticed that The Baby had developed an apparent obsession with the lower kitchen cabinet to the direct left of the sink, which he has not showed the least bit of interest in for the entire almost two years he's been with me.
His new obsession was a surprise, as this cabinet is a seldom-used storage space that plays host to extra rolls of paper towels, assorted serving platters, and other kitchen miscellany.  In other words, it is not routinely used to store anything he would find interesting, i.e. food, treats, or anything even remotely edible. Therefore, it should have clued me in to the fact that something was not as it should be when he took to standing sentry beside it for long stretches of time with all his faculties avidly attuned to something I could not see or hear.

More back story:  I live in the Soho area of South Tampa, a block or so off the water in an area that, due to its close proximity to the water as well as its many historic homes, is known to have issues with mice, as well as their more insidious cousins, rats.  I have lived in my house for five years and never had any problems with them myself, but more than once I have been walking with the dogs along Bayshore Boulevard, a long, winding necklace of prime waterfront strung with the pearls of high end real estate valued in most cases in the multi-millions of dollars ... FYI - in case you were wondering, NO, my mouse-house is not one of these - and stumbled upon the toes-up corpse of one species of rodent or other, so it really should have dawned on me that The Baby's sudden and nigh-to-rabid preoccupation with a seemingly innocent kitchen cabinet spelled trouble.

Alas, it did not.  And I have paid, and dearly, for not according due attention to what my little house panther's unusual behavior should have been telling me, especially when considering that my next door neighbors, who recently moved out of state and put their as-yet-unsold house on the market, were of the, if you'll pardon the pun, pack-ratly persuasion, and I find it very plausible that in the packing up of the worldly belongings stored in their garage, they may have unwittingly disturbed a rodent domicile or two in the process.

All of this is bad enough.  But as the saying goes ... where there is one, there are likely more.  Which makes me wonder if there are other cousins of the unfortunate mouse dispatched so efficiently, albeit cold-bloodedly, by The Baby, lurking in the cabinet by the sink, or elsewhere in my house.  I have not seen any signs of this, but I have nonetheless contacted an exterminator to come out so I can be reassured (or horrified) by a professional assessment of the situation.  I also have to face the almost certain reality that my sweet little kitten not only killed, but also consumed, the unfortunate rodent.

In the initial aftermath, I was not altogether sure what I feared more ... that The Baby had consumed the mouse, or that he hadn't.  After cautiously pulling back my bedclothes, peering  under the bed, and searching various other places throughout the house for any additional pieces of this disturbing puzzle, all the while in fear that my explorations were a Whatever Happened to Baby Jane moment in the making, I was forced to accept the fact that The Baby had dispatched his kill in the way cats have been dispatching their kills since time out of mind.  Which, inevitably, led to the fear that the mouse had been poisoned, and that my little kitten might now be in danger of being poisoned also.

FORTUNATELY, this has proven to not be the case.  The Baby, one emergency vet appointment and a full week later, is absolutely fine, thank heaven.  But I have a newfound respect for my youngest "child."  He might be my baby, but he's apparently also got some hunting chops, and he takes his house panther role more seriously than I would have imagined.

I also, I have to admit, feel kind of sorry for the mouse. Because as bad as my day sucked on the morning that the sole of my bare foot encountered his earthly remains, that poor mouse's day sucked a lot worse.  Imagine if you were a mouse ... and the last thing you saw on this earth were these eyes staring you down ... 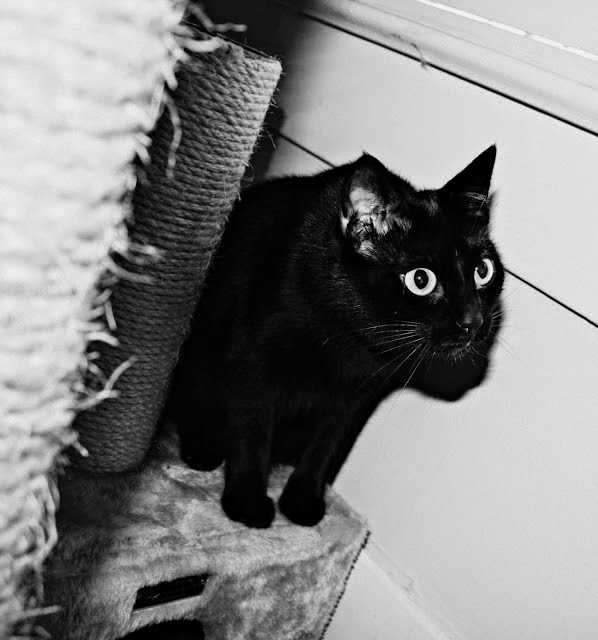 Rest in peace, little mouse.  And I'm glad there are no more of your friends in my house.
Posted by Unknown at 7:10 PM