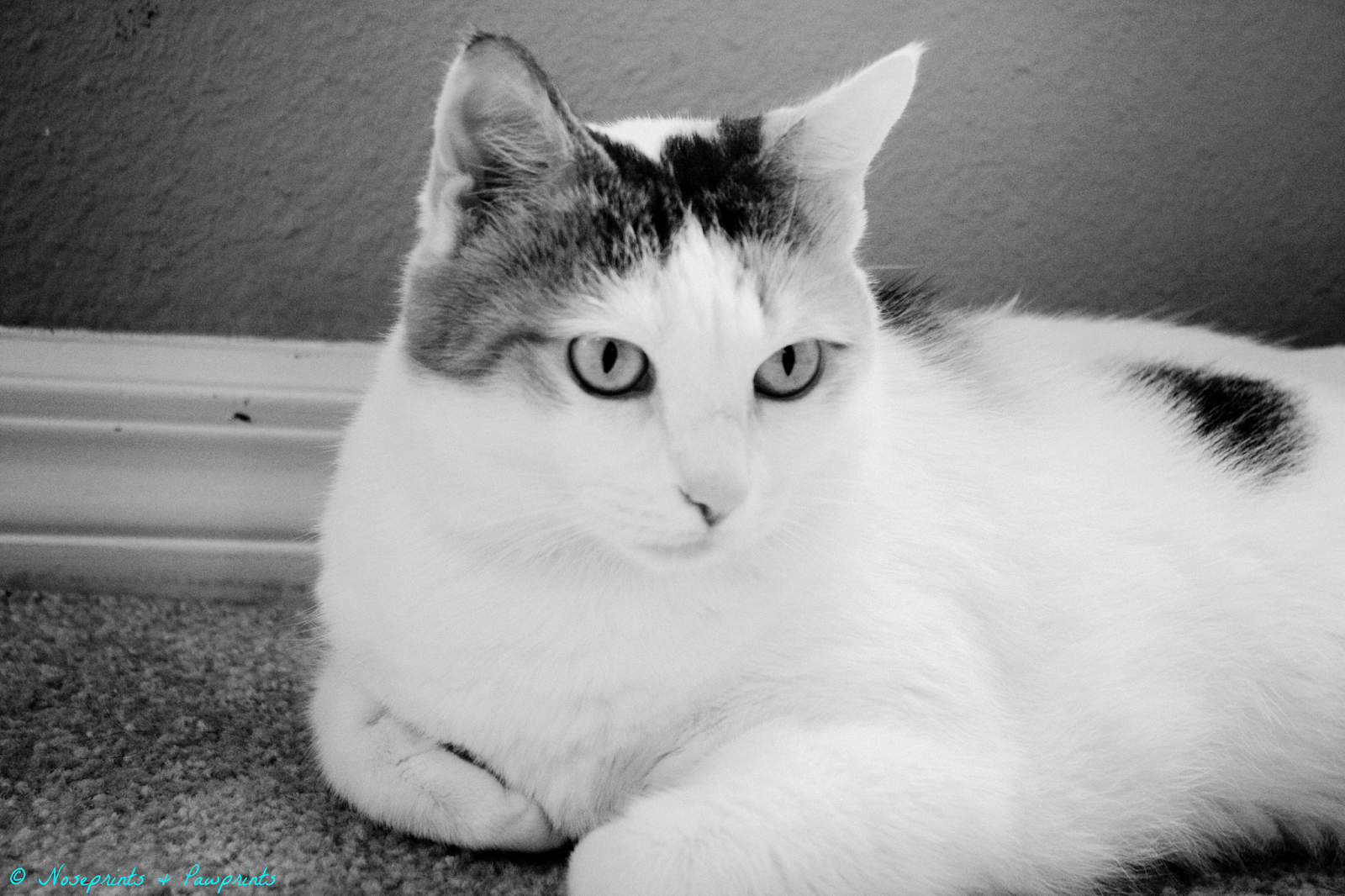 The Diva is a nine year old calico domestic short hair, who joined our family at the age of about five weeks.  She was a feral kitten whose mother had her kittens under my office building  She was one of only two kittens in her litter to survive, and was the last to be rescued.  One of her brothers was rescued and adopted by a girl in the office building next door, though sadly, his identical twin was not so fortunate.  I was able to capture him (rather easily in fact, as he was so weakened), but despite my vet's best efforts, he was so sick and weak that the advice I got was that the most humane thing to do was to euthanize him.

After that, I wasn't holding out  much hope for The Diva, but she hung on for four days after her one brother succumbed and the other was rescued, doing so, I believe, out of sheer stubbornness. We set out Hav-A-Heart traps baited with tuna and canned food, but The Diva would not be tricked. A co-worker got within a finger's reach of her once and tried to grab her.  The Diva bit her, (setting off an avalanche of resultant drama, as clearly she was not vaccinated) and then fled.  It was a cat and mouse game of epic proportions that went on for days, except that in a strange turn of events, the cat was actually the mouse, and we humans were the woefully inept cats.

Finally, in a last-ditch effort that involved a co-worker distracting her while I shimmied on my belly into a crawl space (my office at that time was located in an old Craftsman style bungalow with a crawl space beneath), tried not to think about the spiders, other insects, and who-knows-what-all-else was sharing that crawl space with me, snuck up behind The Diva, trapped her in a corner, and with nothing but a hastily grabbed promo T-shirt from a local radio station between my hands and her flailing kitten claws and sharp kitten teeth, I scooped her up, and hastily exited the crawl space, miraculously managing not to get bitten, clawed to ribbons, or encountering any spiders, snakes, or other creepy-crawly things in the process.

I hadn't planned on getting a kitten ... but I have to admit that even as my co-worker drove me to my vet's office, with me holding The Diva (who may have been filthy, bedraggled, dehydrated, and half starved to death, but still had a glimmer of her future Diva-ish-ness about her) on my lap, I was starting to mull it over in my mind.  My fate was sealed when I picked her up from the vet's the next morning (she had been treated for dehydration, gotten a good meal, some kitten shots, and a much-needed bath), I was amazed to see that under all that grime and filth was the makings of a stunningly beautiful calico girl, and although I'm sure I'd have loved her just as much had she been homely, her gorgeousness was certainly a welcome surprise.

Over the last nine years (ten this spring), The Diva has fulfilled the promise I saw in her as a kitten.  I knew she would be beautiful, and she is.  I also knew, to put it bluntly, that when cornered or crossed, she would make Joan Crawford look like Mother of the Year.  She is the uncontested queen of the household, a crown that I conceded graciously, and that The Flying Monkey knew better to contest.  As for The Paragon, The Hunk, and The Baby ... they definitely know better.  The Diva doesn't play, and while she mostly rules with a look from her green-gold eyes that could melt steel, she is also not afraid to voice her displeasure with a hiss, a caterwaul, or a well-timed swat of her dainty white paw.

And this girl can pout  ... like for weeks.  Months, even, if the situation warrants, such as the time I brought The Hunk home as a six week old kitten.  Despite The Hunk's numerous kittenish charms The Diva let it be known that he found no favor with her whatsoever, and not only did she not embrace (then, or really ever since) The Hunk, she clearly blamed me for having brought him into her realm, and held me responsible for the upheaval he caused in her eyes.

And yet, The Diva does have a soft side.  She is extremely affectionate, and when you are sad or ill, she will come up and give you the sweetest little air kisses with her nose right against your face. She loves to cuddle and snuggle, and adores being brushed.  Any sort of pampering is fine by her, and she not only enjoys and appreciates it, but sees it as her due. As, of course, it is.  She is a Diva, after all.