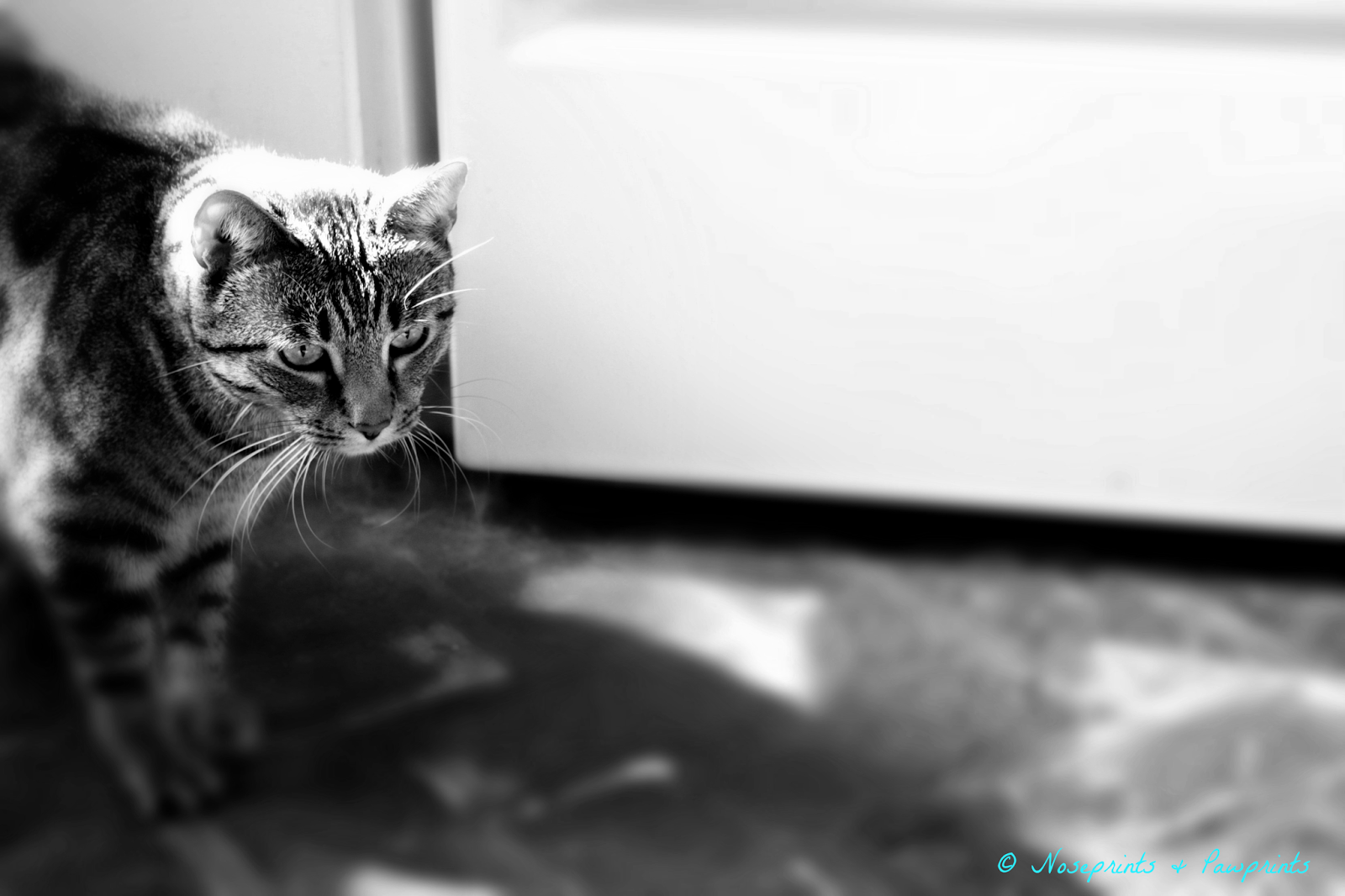 A handsome man with a well-developed physique.  (This is the slang definition of "hunk," according to Dictionary.com)  Yep, when it came to deciding upon a moniker for a certain brown mackerel tabby cat, I definitely nailed it.  I mean, come on ... just look at those whiskers!  Those adorable nose freckles!  Those dreamy green-gray eyes!  (Ok, so I know you can't tell what color his eyes are in a black and white photograph, but they are, in fact, a particularly enchanting combination of green and gray in most lights, except for in direct sunlight when they turn a stunning topaz yellow that would make Edward Cullen jealous and Bella Swan swoon.)  Indeed, if The Hunk were a human, he would be, I am here to tell you, a catch, and those eyes, by the way, are no small part of that appeal.  In fact, when he was a six week old, recently-rescued feral kitten, it was those eyes that first captivated me, drew me in, and made me abandon all reason and common sense, not to mention face the wrath of The Diva herself, and invite him into our family.
Of course, it wasn’t long before I became enamored of The Hunk’s many other charms, but the truth is that it was those captivating eyes, as well as his inordinately sweet and gentle disposition, that really made it impossible for me to give him up, despite the fact that a friend of mine had found a home for him with a work friend of her husband’s.  Even when it became clear that The Diva was about as pissed off as she had ever been in her life, and was intent on taking it out not just on our hapless Hunk, but also on me, The Paragon, and any other living being in a fifteen mile radius, I could not let him go.  I kept telling myself she’d adjust, and mostly she has, but sometimes when I see her curled up asleep somewhere with a satisfied look on her little Diva face, I imagine that she is dreaming about a time Pre-Hunk, when she didn’t have to worry about being pounced on or unintentionally mussed up by her much larger brother, who, though he loves her dearly, plays too roughly for her taste.

It isn’t just me who is a helpless slave to The Hunk’s charms, though.  He has achieved nigh-to-celebrity-status at our vet’s office, and has been known to make the front desk ladies and the female vet techs nearly have an attack of the vapors, so overcome are they by his striped handsomeness.  In truth, everyone loves The Hunk, but the thing about The Hunk is … when it comes to humans, he really only loves me.  And while this makes me worry about him sometimes, (what would happen to him if something happened to me, for example?) it is still very flattering.

Starting at about a year old, The Hunk also took up a very special place in our household – that of Watch Cat.  What, exactly, he is watching for, is usually not clear, but unlike The Diva or The Baby, his watchfulness is very purposeful. He is not just gazing at the scenery, or captivated by an errant falling leaf, a squirrel darting up the nearest tree trunk, or a bird flitting by.  He is WATCHING.  For whatever, whenever.  And nothing is going to escape his notice, you can bet on that.  He may dart under the bed or nearest piece of heavy furniture in response to whatever it is that may be out there, but not before warning everyone in the house that they would be wise to do as he plans to do, and take cover.  If we fail to heed his advice, then fine, but it will not stop him from WATCHING.

One of the main things The Hunk watches for, though, is me.  If I go out to walk the dogs, get the mail, take out the garbage, or whatever, I know that when I return, he will be sitting by the front door, peering through the window awaiting my return.  This is never so endearing as when I arrive home at night from work, often late, often both mentally and physically tired, and see his little face in the window, watching for me.

There is a quote by Jean Cocteau, which goes “I love cats because I love my home and after a while, they become its visible soul.”

This is true, I think.  My house is not grand, but it is home, and as such, it is my sanctuary.  It’s the place I miss when I’m away, and look forward to coming back to, not so much because of the dwelling itself, but because of who is there awaiting my return.  And as much as I can’t help but smile and be cheered by the welcoming barks and furiously wagging tails of The Paragon and The Flying Monkey, it is the quiet, yet enduring, presence of the felines of the house which ensure that the heartbeat of our home is never silent.  The people of the house come and go, and so do the dogs, but the cats never leave, and it is The Hunk’s expectant presence, somehow always there watching and waiting for me to return, that touches my heart in a particular way I can’t really explain.