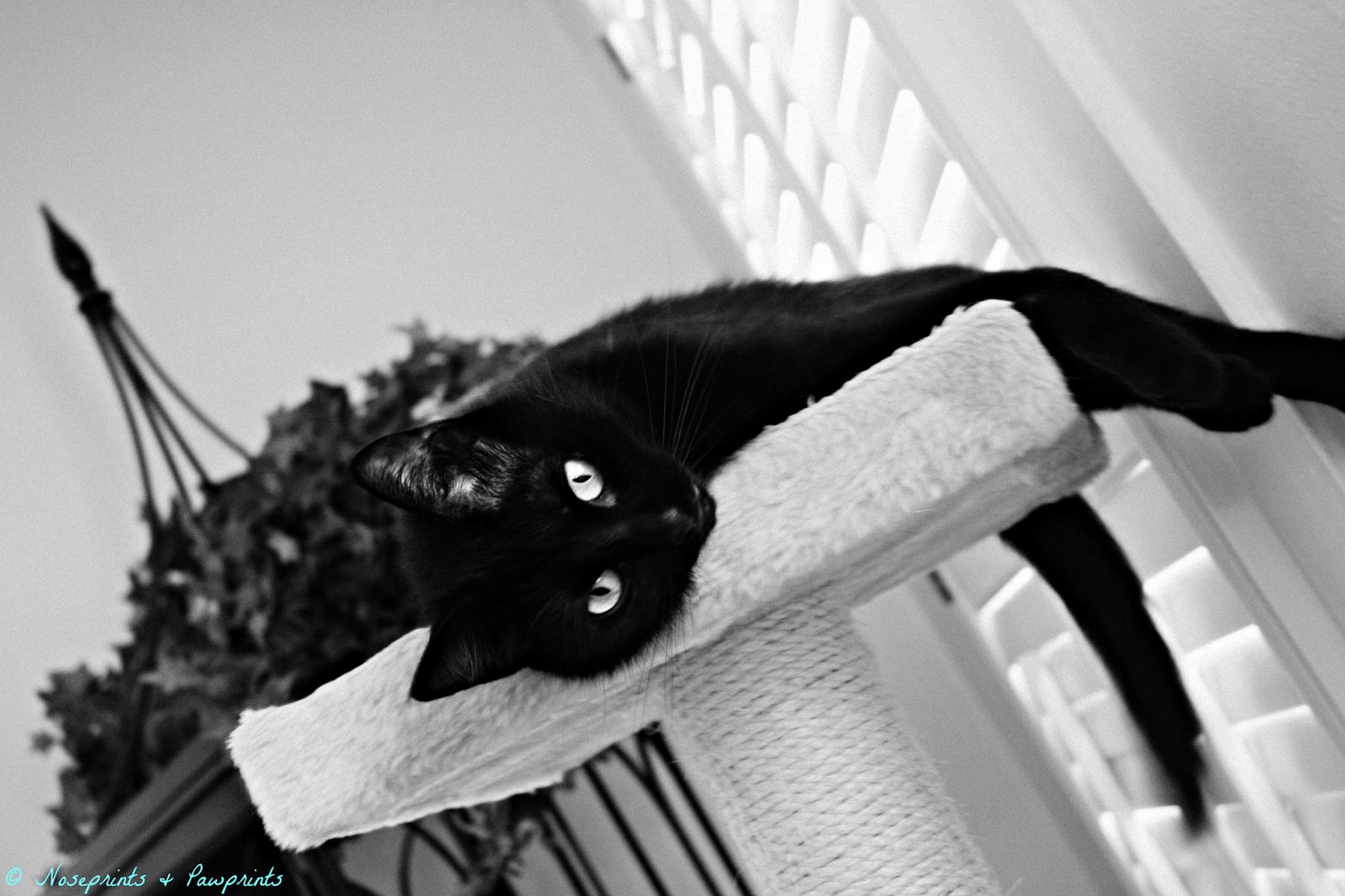 What to say about The Baby? Well, I could start with the fact that I could easily have chosen The Train Wreck or The Money Pit as his moniker, rather than the one I did. This boy has been adventure, that is for sure!

As The Diva and The Hunk both were, The Money Pit, er The Baby was a feral kitten. Unlike them, however, he did not have the good fortune to be discovered and rescued at a very young age, as they did. The Baby was not mere weeks old, but four months old, when I drove into the parking lot at my office early one morning and found him lying at the edge of the concrete, completely motionless.

I'll spare you the full details of the story of how, after calling about twelve different cat rescues (all of whom were full up, it being kitten season and all), I actually did find him a home, only to have them call me the very next day and ask me to come get him or they were going to take him to the humane society and turn him in. The reason? He was hiding under the bed. (Shocking, right? A kitten that was completely feral less than two weeks before hiding under the bed a strange environment? No WONDER they wanted to turn him in to the humane society!  Idiots!)

Needless to say, I went and got him immediately, and guess what? As soon as I called the name that I'd tried really hard not to give him, he popped out from under the bed, meowed sharply, and ran to me so I could pick him up, something he still does to this day. (Whenever I call his name, he will come running to me from wherever he is in the house, and then stand up on his hind legs so that I can grasp him under his armpits and lift him into my arms, rather like you would a human child.)

Anyway, after this failed attempt at finding him another home, I bowed as gracefully as possible to the inevitable, and brought him home with me, expecting full well that The Diva would unleash her wrath on not just The Baby, but on me as well. In a bizarre turn of events, however, she scarcely raised an eyebrow. It was The Hunk who went into a semi-tailspin, but being the easygoing guy he is, he snapped out of it soon enough. That was three and a half years ago, and The Baby is now four years old.

Like I said ... it's been an adventure. Remember how I said I could easily have nicknamed him The Train Wreck or The Money Pit? Both would have been right on point, for different reasons.
The wheezy rattle I heard in his lungs on that first day persisted for months. It took multiple courses of antibiotics to get rid of it, and to this day, even though he doesn't have any infection, he will still wheeze a bit if he's been playing hard, and at night, he snores. Then, of course, the antibiotics unsettled his stomach and killed his appetite, and he needed every last calorie I could get into him. So he had to be on mirtazapine to kick-start his appetite, but this made him completely sketch out, so then we had to play around with the dosage to get him to a point where his appetite increased without the sketch-out effect. When things were still only marginally improved after two strong courses of antibiotics, my vet suggested a chest X-ray to be sure he didn't have a chest mass.

He didn't, but it was months, and thousands of dollars, before he was well. Truthfully, I credit the L-Lysine supplementation and a raw diet far more than I do the multiple courses of antibiotics, not that it really matters. The numerous broken picture frames, broken lamps, broken dishes, well ... I was just glad he never broke his neck. Paw prints on the windows, my foot. I swear that cat can walk on the ceiling!

Also, perhaps because he spent the first four months of his life almost literally starving to death, The Baby could also have been nicknamed The Beggar. I don't permit my dogs to beg for food while I'm eating, and with the cats it had never really been an issue. The Diva does like to try to stick her head in my cereal bowl if she can, but she is also well-mannered enough to wait patiently until I'm finished, knowing that if she does, I will allow her one or two dainty licks before taking the bowl away. The Beggar, er The Baby, is another story altogether!

He begs relentlessly, and despite numerous not so subtle hints, he never seems to get the message. He's also an opportunist, and woe to the person who foolishly leaves a plate unattended while he's on the prowl. Whatever it was will be gone when they return, with hardly a trace left behind, as though the food simply vanished into thin air.

He's not fussy, either. He will eat literally anything, from mushrooms to pizza crust. I don't, for the record, make a habit of feeding him these things, although now, after three and a half years of working on it, he will usually, now, sit quietly under my chair while I'm eating, and I will occasionally reward him for staying there by slipping him a tiny bite of something, just to reinforce him sitting there quietly on the floor as opposed to parading around on the dining room table. I love my cats, but I draw the line at table or counter strolling. (Ya gotta draw one somewhere, and that's where I draw mine!)

You may notice that all of my cat stories say something, somewhere, about "I wasn't planning on getting a kitten," or "I hadn't intended to keep him," or something in that vein. Well, yeah, and I hadn't intended to keep The Baby, either. I worked harder to find him a home than I really wanted to, since it didn't take me long to fall in love with him, but I did feel that two dogs and two cats was plenty in an 1,100 square foot house, even if the dogs were pretty small. I still feel that way, even though now we've moved, and gained an additional 800 square feet in the bargain. But sometimes fate or destiny, or even sheer stupid sentimentality, wins out.

He nearly sent me to the poor house and/or the loony bin more than once during his first year, and he still tries my patience more than any other animal in the house. I have often said I am not sure if he's just really dumb, really stubborn, or really smart. The truth is, I'm still not sure, and I guess it doesn't really matter. The Baby is who is he is, and I really wouldn't have him any other way.
Posted by Unknown at 10:53 AM